WHAT COMES AFTER Author Interview!

Sorry the radio silence, y'all. I got a job here at home and that's literally eaten up all of my time. That, and Veronica Mars on Netflix and baking cookies and generally not doing anything productive.

Anyways, today I have a very awesome interview with the author of WHAT COMES AFTER, Steve Watkins! Not only is he awesome, but he also attended FSU, just like I do. 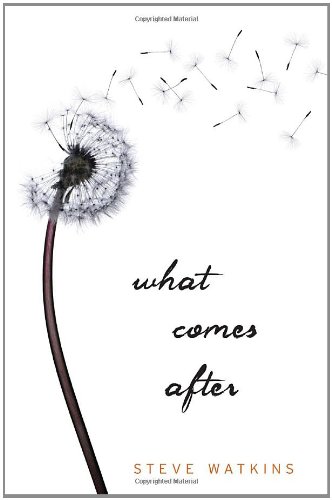 After her veterinarian dad dies, sixteen-year-old Iris Wight must leave her beloved Maine to live on a North Carolina farm with her hardbitten aunt and a cousin she barely knows. Iris, a vegetarian and animal lover, immediately clashes with Aunt Sue, who mistreats the livestock, spends Iris’s small inheritance, and thinks nothing of striking Iris for the smallest offense. Things come to a head when Iris sets two young goats free to save them from slaughter, and an enraged Aunt Sue orders her brutish son, Book, to beat Iris senseless - a horrific act that lands Book and his mother in jail. Sent to live with an offbeat foster family and their "dooking" ferrets, Iris must find a way to take care of the animals back at the farm, even if it means confronting Aunt Sue. Powerful and deeply moving, this compelling novel affirms the redemptive power of animals and the resilience of the human spirit.


Obviously WHAT COMES AFTER deals a lot with animal abuse - are you a big advocate of animal rights?

Well, yes and no. I don’t believe, as some animal rightists do, that animals are people too. That is, I don’t believe they have the same level of sentience, of consciousness, of self-awareness as we do. That said, I believe we humans have a collective responsibility to treat animals—to treat everything on Earth—responsibly and ethically and in a kind and loving manner. We’re the stewards here. We don’t own it. We’re just responsible for taking care of the place, and everything that lives here.

When did you first start writing?

Probably about the time I read my first book. But the first thing I remember actually writing was a story called “The Glisening Sword” (and yes, I did leave off the silent “t” in glistening throughout the book, which I not only wrote, but illustrated as well). I was probably in second grade. It’s about a boy named Tommy who brings his dog to this place called Death Drop Off (which I misspelled as “Death Drop Of,” also throughout) to investigate a mysterious, malevolent sword that has been terrorizing the neighborhood. While they’re camping next to Death Drop Of (or Off), the sword, which has tentacles on the handle, shimmies up the side of the thousand foot hole, comes out, and impales the poor dog, killing it instantly. The sword then knocks Tommy knocked down into Death Drop Off (or Of). Fortunately it’s a soft, mucky bottom and he survives the fall. The place turns out to be a diamond mine, which oddly, also has cabbage-size rubies, one of which Tommy grabs and bashes the Glisening Sword into submission. He escapes. The end.

How did you come up with the idea for WHAT COMES AFTER?

From an article I read in our local newspaper. The article at the beginning of WHAT COMES AFTER is actually a lightly fictionalized version of the actual article from the newspaper. I was recently contacted by the detective who investigated the case in real life, asking if it was the same case he had worked on. He said he was proud of his work on that case because he was able to solve what happened, and help out someone who desperately needed it. I intentionally didn’t find out what happened to the girl in the actual case, though my friends in social services and the organization CASA—Court Appointed Special Advocates—did know her and her circumstances. I’m sure she’s aged out of the foster care system by now. The detective thought she might be back in New England. I’ve worked on a number of abuse and neglect cases as a child advocate and investigator, and know that there’s always so much more to anyone’s story than the minimal explanation you often see in the paper about the victim, and so I wanted to imagine this girl’s story, and so I did.

Short stories are much more difficult in some ways. It’s such a compressed form, you have to develop your characters, your situation, your conflict, your plot, and find your thematic resonance all in such a short amount of time and space. I’ll spend easily ten times the amount of time writing a short story as I will a novel chapter of comparable length. Very different challenges, those two genres. I love both, but probably haven’t written a new short story in five years. (Though I have written three novels in that time—one a work in progress, my next book with Candlewick Press, called JUVIE.)

Who's your favorite author?

I’m going to quote myself here—from another blog post I did for someone else, who asked if I ever had a fanboy moment. I said yeah, all the time, and then I listed a bunch of writers and works, all of whom and which I’d have to include in my list of favorites, because nobody, and I mean nobody, has just one favorite author: Toni Morrison’s The Bluest Eye, Harper Lee’s To Kill a Mockingbird, Mark Twain’s The Adventures of Huckleberry Finn, Dante’s Inferno, Joseph Heller’s Catch 22, Tracy Kidder’s Mountains Beyond Mountains, E.M. Forster’s A Passage to India, Joseph Conrad’s Heart of Darkness, Tim O’Brien’s The Things They Carried, Mary Shelley’s Frankenstein: The Modern Prometheus, Tobias Woolf’s This Boy’s Life, Louis Sacher’s Milkweed, Anne Tyler’s Dinner at the Homesick Restaurant, Jean Merrill’s The Pushcart War, Gabriel Garcia Marquez’s Chronicle of a Death Foretold, James Joyce’s Dubliners and especially “The Dead,” Peter Matthiessen’s At Play in the Fields of the Lord, Thom Jones’ “The Pugilist at Rest,” William Faulkner’s The Sound and the Fury, Ecclesiastes, Margaret Wise Brown and Clement Hurd’s Runaway Bunny, so many others and so many works that have left me stunned into stillness and silence and awe.

What are your biggest writing inspirations?

I don’t know if you could call it an inspiration or not, but when I was little I used to get scared a lot at night and I would beg my older brother to let me crawl into bed with him. He was on the bottom bunk; I was on the top. He had two conditions for letting me in: one, I had to bring my own pillow and lie with my head at his feet, and two, I had to tell him stories. So I would be lying awake deep into the night, spinning these wild stories, caught up in my own narratives, long after he started snoring. I wrote a fictionalized version of that in a scene in my YA novel DOWN SAND MOUNTAIN. I don’t think my brain has ever stopped making up stories since then, and now it’s not so much a case of needing inspiration to write as it is that I write because I can’t not write.

Why do you write for young adults?

I didn’t mean to at first, but my agent thought DOWN SAND MOUNTAIN would make a good YA novel, and Candlewick agreed. They were very generous with their offer to buy DSM, which I hadn’t consciously written for a younger audience, and they were so wonderful to work with, especially my editor, Kaylan Addair, that I decided I wanted to write another for them. That next book was WHAT COMES AFTER, and now I’m working on a third for Candlewick, JUVIE, which I mentioned above. What truly has drawn me back to writing YA novels is that it’s such a hopeful genre. Younger readers—and that includes many readers all the way up to retirement age and beyond—want challenging and compelling characters and stories and themes. They don’t want to be patronized—they understand that life can be hard, can be VERY hard, and painful at times. But they haven’t given up hope—for finding meaning even in the hardest of circumstances, for truth, and for grace--and they want a literature that reflects that.

Awesome, very insightful answers, Steve! I can't wait to get my hands on a copy of WHAT COMES AFTER, which was published April 12th!
Posted by Samantha R. at 9:58 PM