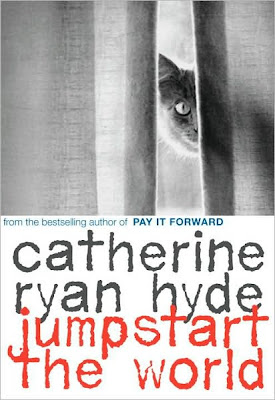 Title: Jumpstart the World
Author: Catherine Ryan Hyde
Page Count: 192 pages
Summary: Elle is a loner. She doesn’t need people. Which is a good thing, because she’s on her own: she had to move into her own apartment so her mother’s boyfriend won’t have to deal with her.

Then she meets Frank, the guy who lives next door. He’s older and has a girlfriend, but Elle can’t stop thinking about him. Frank isn’t like anyone Elle has ever met. He listens to her. He’s gentle. And Elle is falling for him, hard.

But Frank is different in a way that Elle was never prepared for: he’s transgender. And when Elle learns the truth, her world is turned upside down. Now she’ll have to search inside herself to find not only the true meaning of friendship but her own role in jumpstarting the world.

Tender, honest, and compassionate, Jumpstart the World is a stunning story to make you laugh, cry, and honor the power of love.

Review: For this novel, I'm going to deviate from my usual format of reviews because I feel that this would do it better justice.

First of all, I loved Jumpstart the World! Loved, loved, loved it. There's something about the way that Hyde writes that is so authentic and real and raw that you can't help but love the characters - this happened in The Year of My Miraculous Reappearance as well. And Elle, she was so endearing. She said awkward things and then overexplained herself and ended up offended people more than usual, something that I tend to do a lot. She also didn't have a very good relationship with her mother - and for good reason!

Frank was another amazing character. I don't read much LGBT literature, but the way that the issue of him being transgendered is portrayed is as though it really isn't an issue at all, just a part of life, which I thought was really awesome. And I could tell why Elle loved him; he was just one of those characters that, like Elle, are so raw and real and even though they've been through crap in their lives, they came out of it a better person and just make everyone around them happy. It touched my heart.

I think the thing that made this book amazing are the characters. I cannot stop talking about them, I swear. I keep trying to write about the plot or something else, but it always comes back to them - Frank, Elle, Elle's friends, Elle's mom - they all just pop off of the page. And they have faults, yes. But it didn't make me dislike any of them because it just made them seem like real people.

Honestly, I don't have a bad thing to say about this book. It was really, really great and it touched me in a way that Hyde's books only can, in the same way that her other books have. I definitely think you should go buy a copy, if you haven't already! Also, if you haven't, you should check out my giveaway for the book!